Our resident used boat expert Nick Burnham picks out four of the best boats under £250,000 that can be found on the secondhand market.

It’s price challenge time! I love these because they allow me to indulge my personal fantasies rather than picking boats to fit a brief (or budget) that wouldn’t necessarily be mine. This month I present an absolute feast of personal dreams – the hardest thing for me would be which one to choose. The Fairline Targa 44GT is probably the best compromise – it does a little of everything so very well.

But why compromise, when the single-minded pursuit of being the ultimate high-performance weekender beckons in the beguiling shape of the Sunseeker Superhawk 43? Or maybe I could swing the other way – the Nimbus is surely the best year-round proposition. But the stunning Princess V58, with its unusual soft top and palatial full-beam owner’s cabin (before such things technically existed at this size) would be a dream come true. 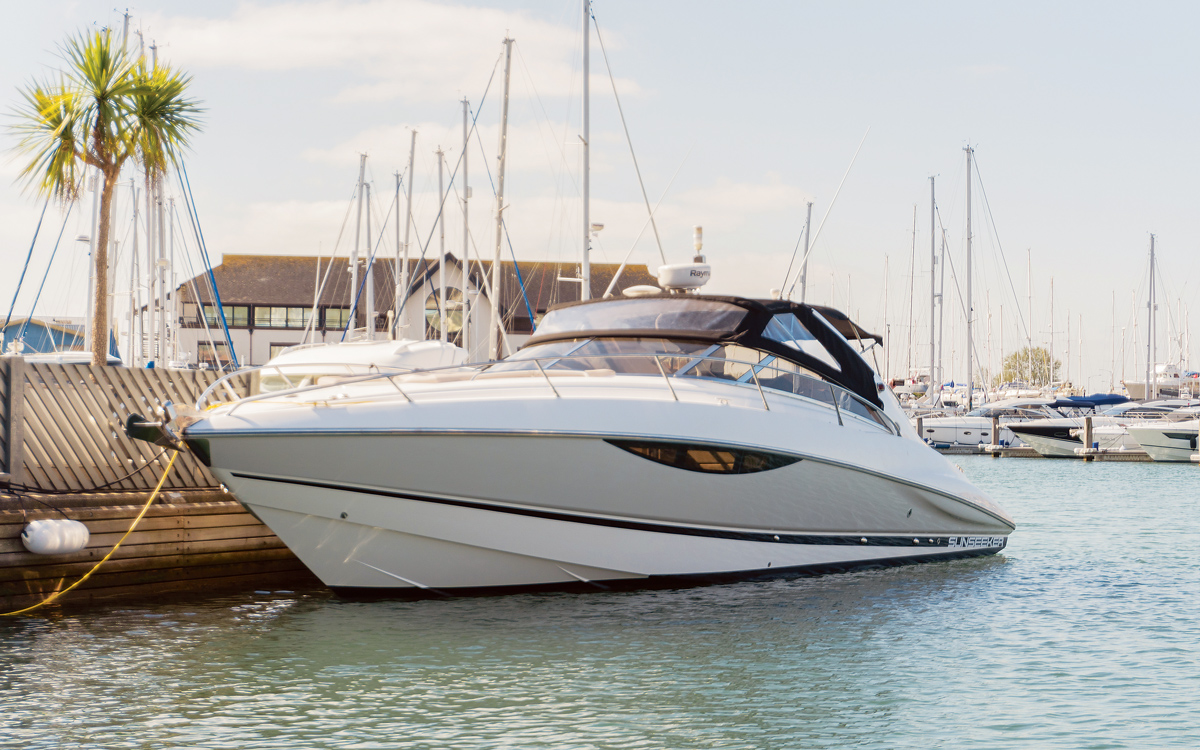 Sunseeker’s reputation for sporty vessels is founded in a rich history of high-performance craft that date back to boats like the XPS34 of the mid 1980s and the Hawk and Superhawk series of the 1990s and 2000s. It was a dynasty that finally came to an end with the Superhawk 43 – the boat you see here that was manufactured between 2006 and 2009. Now only the rather left-field Hawk 38 flies the super high-performance banner for Sunseeker.

Modern boats are all about cabins. Anything much past 35ft has to have two cabins plus a saloon, and even boats as small as 25ft are now available with at least one separate sleeping cabin. So it’s intriguing to discover a 43-footer that has just the one open plan space downstairs.

With a double bed in the bow and an L-shaped settee opposite the galley, it’s all you really need for a couple to weekend comfortably aboard. Sunseeker sensibly ensured the settee backrest also lifts up to create a Pullman-style berth, freeing-up the space for an occasional two more. 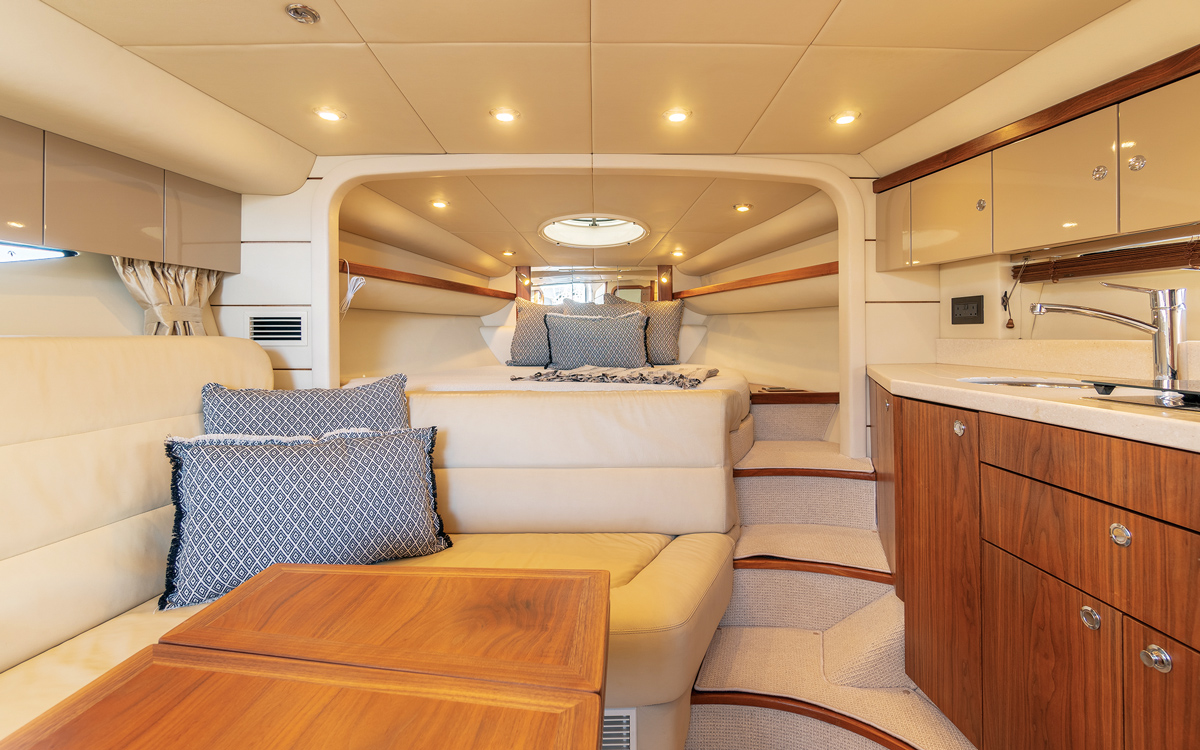 It’s all open plan below, except the heads, with a double bed in the bow and a convertible settee

The reason for that minimalist interior layout is evident from the outside – this is a proper performance boat designed from the outside in. It’s long, low, narrow and fast. It still looks sensational. There’s a pretty decent cockpit sunk deep into the boat to keep the height and centre of gravity low. The cockpit has a double helm forward and a wet bar opposite a dinette with a swing-out table plus a raised sunbathing area back aft.

Sunseeker offered a pair of Arneson surface drives mated to 480hp Yanmars or triple 325hp Yamaha diesels, but the twin Volvo Penta 350hp motors fitted to this boat are the mid-range choice and arguably the most practical and financially efficient solution, which still give an exhilarating 40-knot top end. 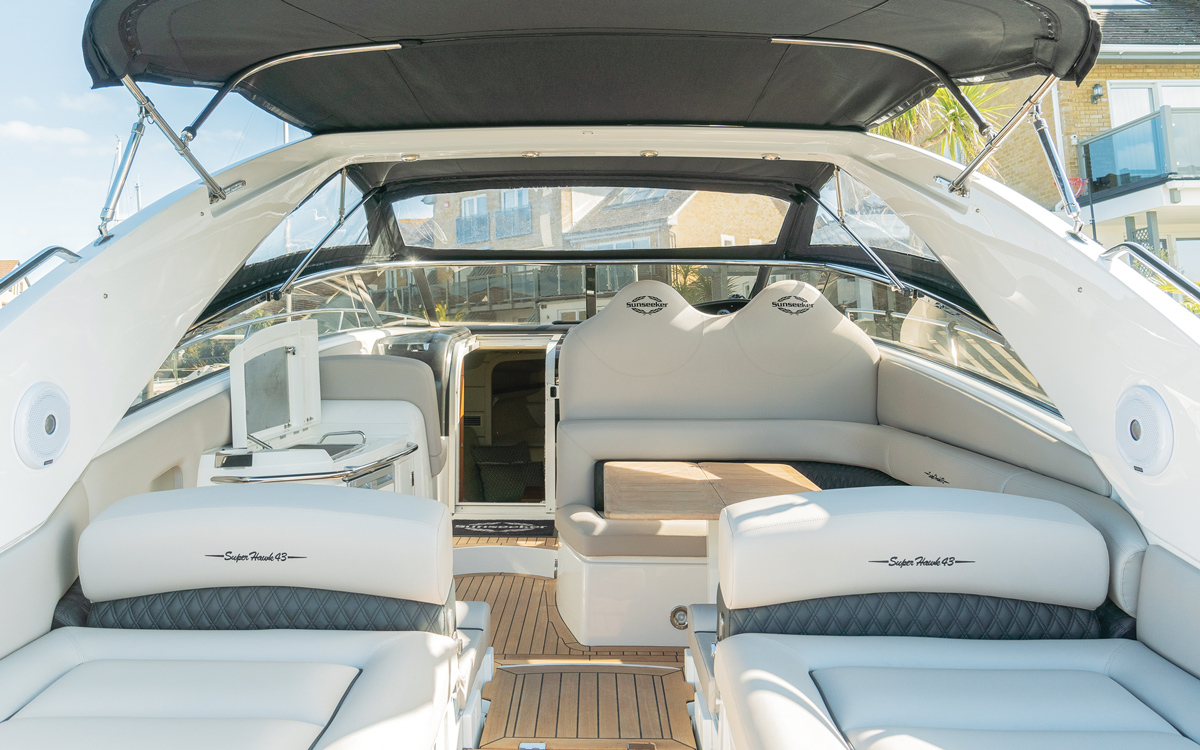 A proper deep-vee twin-stepped high performance hull means that the Superhawk 43 has both power and control. It corners like a motorbike, cranked over so far that you feel like you might get your ears wet, and just as impressively, it cleaves the sea like a laser. 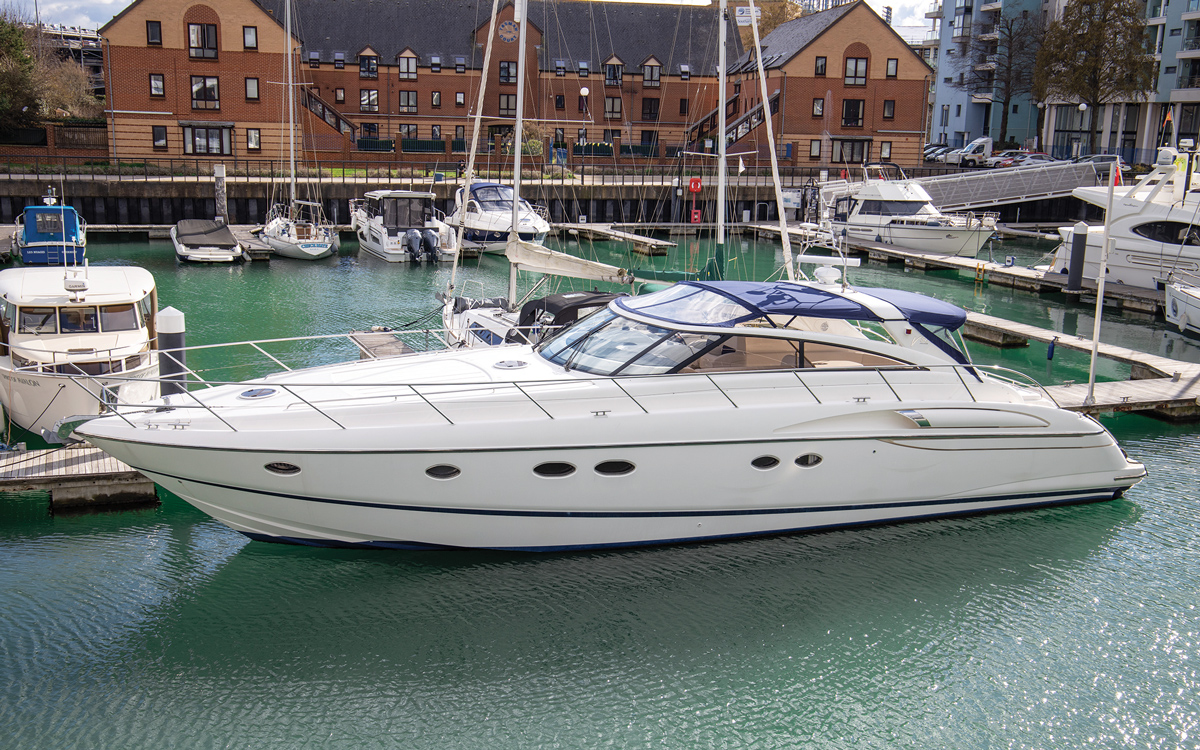 In 2000 Princess launched the V65, flagship of its sportscruiser series at the time. It was the first boat that Princess fitted a proper hard top to. It was an open-backed affair over the cockpit with a sliding fabric roof, rather than one with doors at the back to create an enclosed deck saloon, but it proved popular, quickly filtering down the range, so when the V58 came out in 2002, it too had a similar hardtop on the options list. Everybody seemed to want it, meaning that almost no V58s left the factory without it. Almost…

2003 predates the current convention for full beam owner’s cabins in the centre of the boat, so the standard layout of the V58 had an owner’s cabin in the bow with a double bed, and an asymmetrical pair of cabins aft to give one large cabin with an offset double berth and a smaller third cabin with bunk beds. Unusually, this particular boat was originally ordered by an owner clearly ahead of his time. When he ordered the boat, he specified that the two aft cabins be made into one full beam midship cabin – it’s palatial! 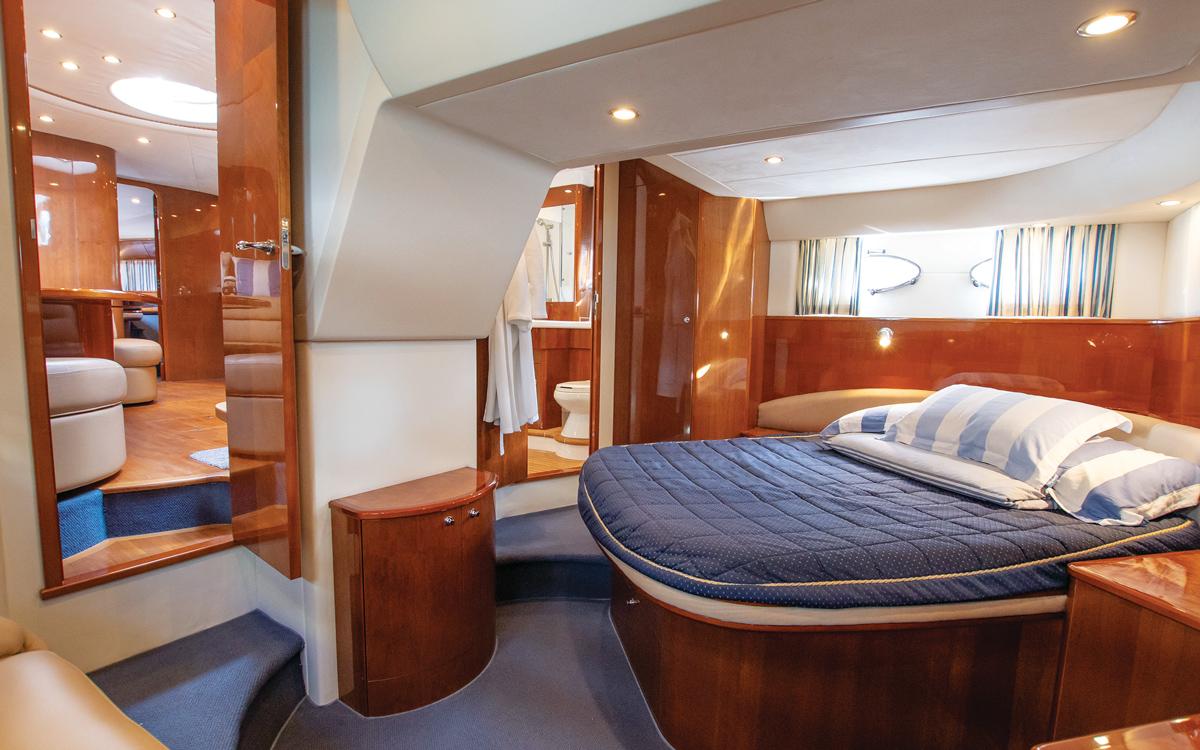 Full-beam master cabin was a one-off owner’s request, most have two guest cabins in this space

Clearly no follower of convention, the other area that differs markedly from the majority of Princess V58s is that the boat was ordered without the hardtop, making it one of the largest fully open sportscruisers Princess ever built. It makes for more work with the canopies, but the result is a proper ‘wind in the hair’ experience for anyone lucky enough to be enjoying the exceptionally spacious cockpit. 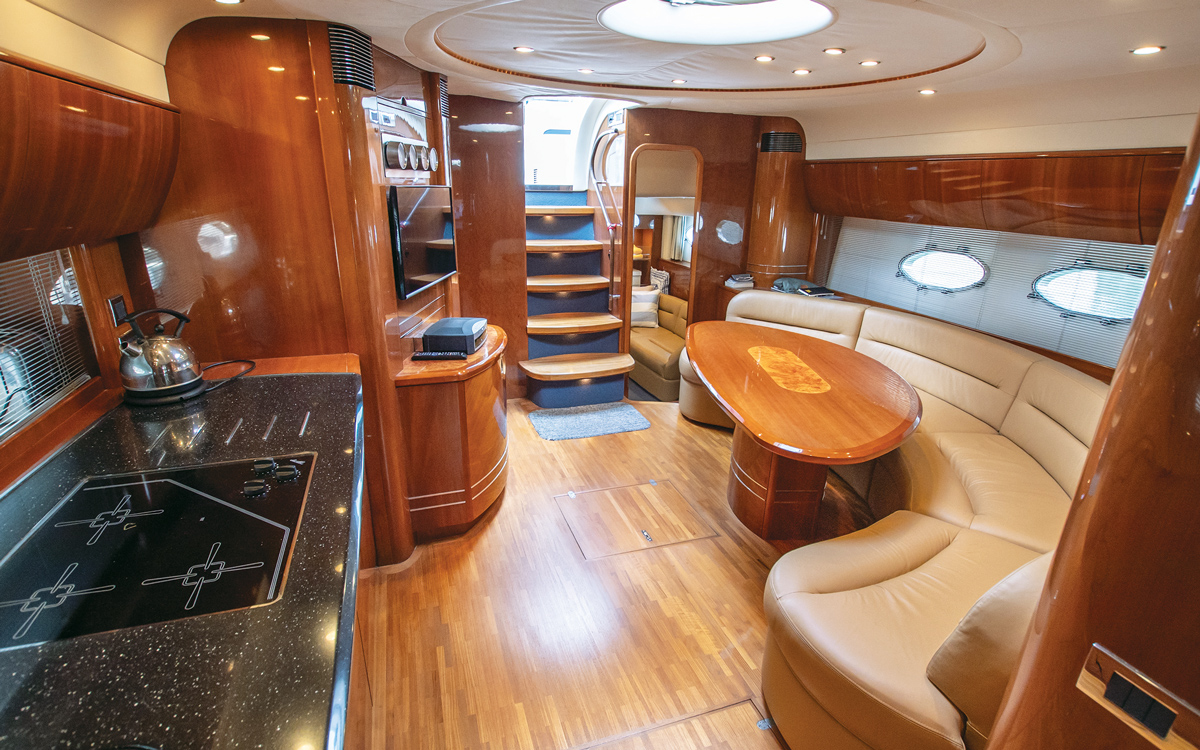 To test its on-paper attributes we took a Princess V58 out for a blast in Mallorca. You won’t be surprised to hear that we found that a combined 22 tonnes and the Olesinski-designed hull made short work of batting aside the choppy sea whipped up by a stiff breeze outside of Palma. 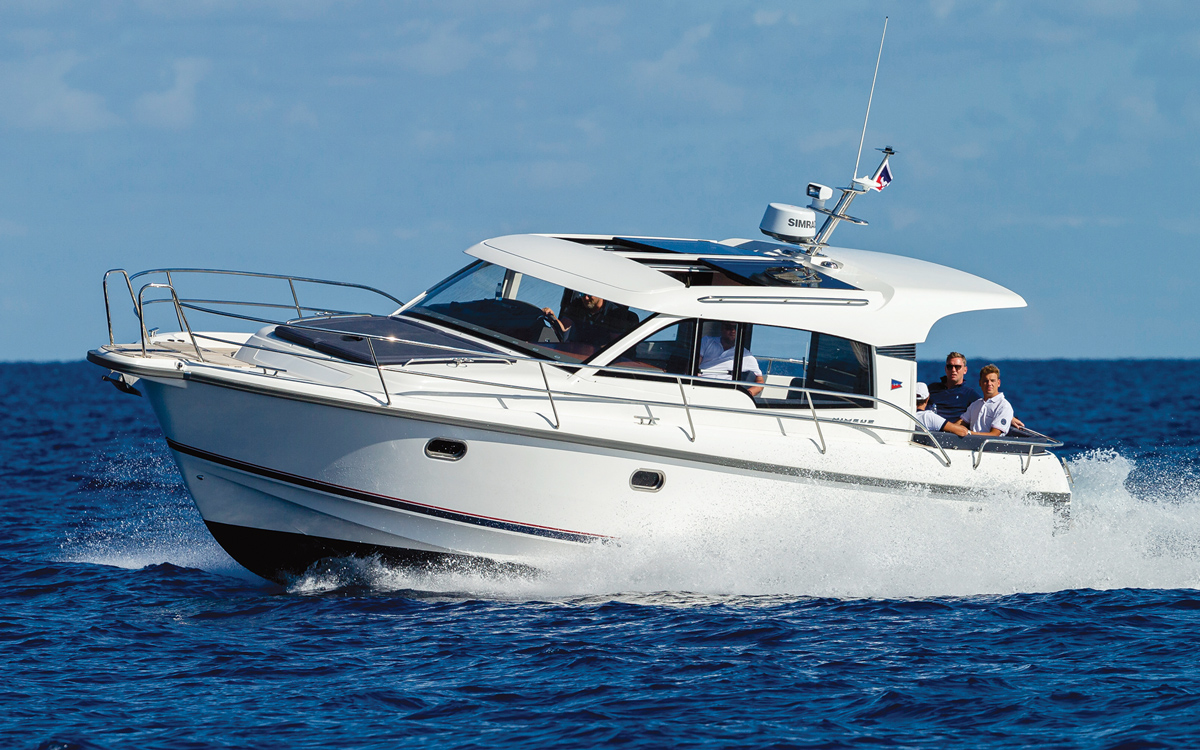 We’re heavy on sportscruisers here for two reasons. Firstly, pickings are slim on the used boat market, you take what you can find to some extent, and secondly because I like them and I’m choosing them. However, in a bid to provide balance and choice, I’ve found a very practical (or ‘super’ practical, as modern vernacular irritatingly has it) deck saloon boat, hailing, as these things often do, from Scandinavia.

Function, function and function, says the Nimbus website, and it’s fair to say that we’re now about as far away from the Superhawk 43 as it’s possible to get. But the Nimbus 365 is indeed incredibly functional. The deck saloon offers great one-level living, being a step-less stroll from the cockpit and housing the galley as well as a large dinette and the helm.

In fact the only reason to visit the lower deck is to use the heads or to sleep in one of the two double cabins (there’s an owner’s cabin in the bow and a second cabin that extends back under the deck saloon). Sliding overhead glass hatches add light and a side door next to the helm open this area to the elements or can be closed to banish them as required. 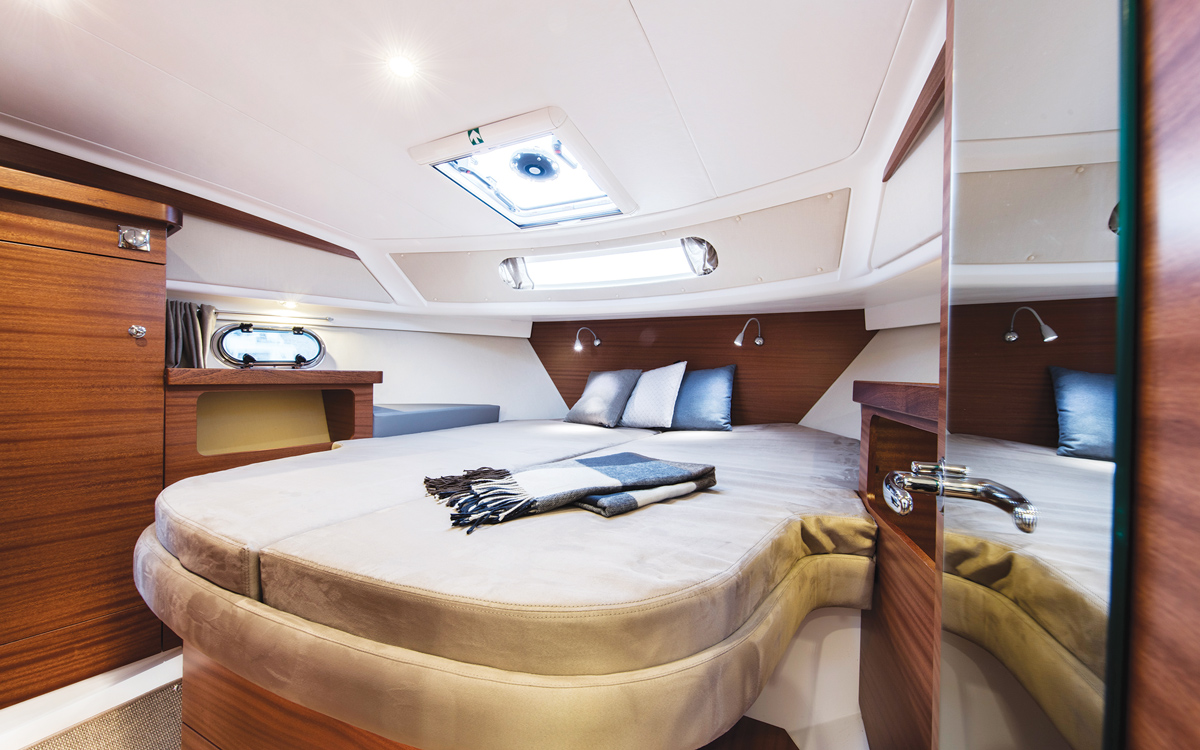 Wide side decks and high rails make this an easy boat to work, as does that side access door at the helm. Back aft, the cockpit is deep and sheltered, with an L-shaped run of seating and a demountable table.

A vee drive gives the benefits of shaft drive while keeping the engine well aft. Single Volvo Penta D6 330 and D6 370 engines were offered at launch, with this boat upgraded to the D6-435, which should improve upon the 24.5 knot v-max when we tested this model with a D6-370. 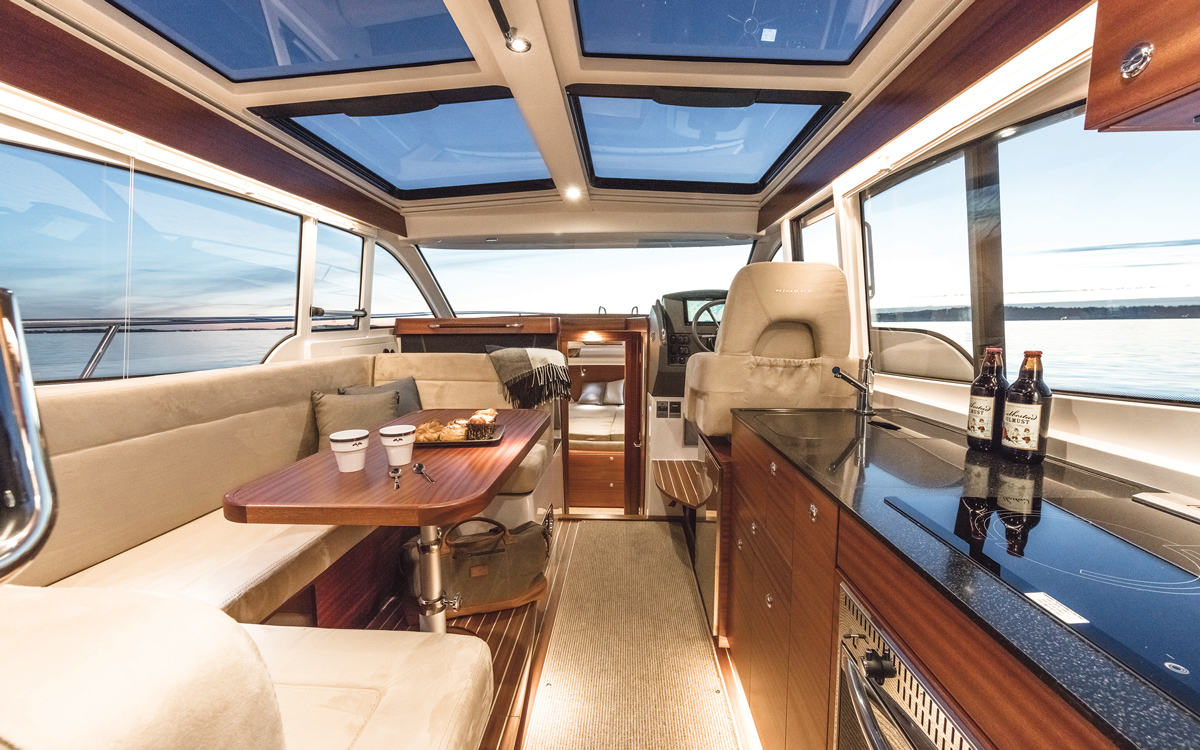 That vee drive results in less responsive but steadier handling than an outdrive. Close-quarter handling is a challenge, but the bow and stern thrusters fitted make amends. Offshore, we said: ‘Nimbus romped over everything, treating us to a soft landing and only the slightest of shudders.’ 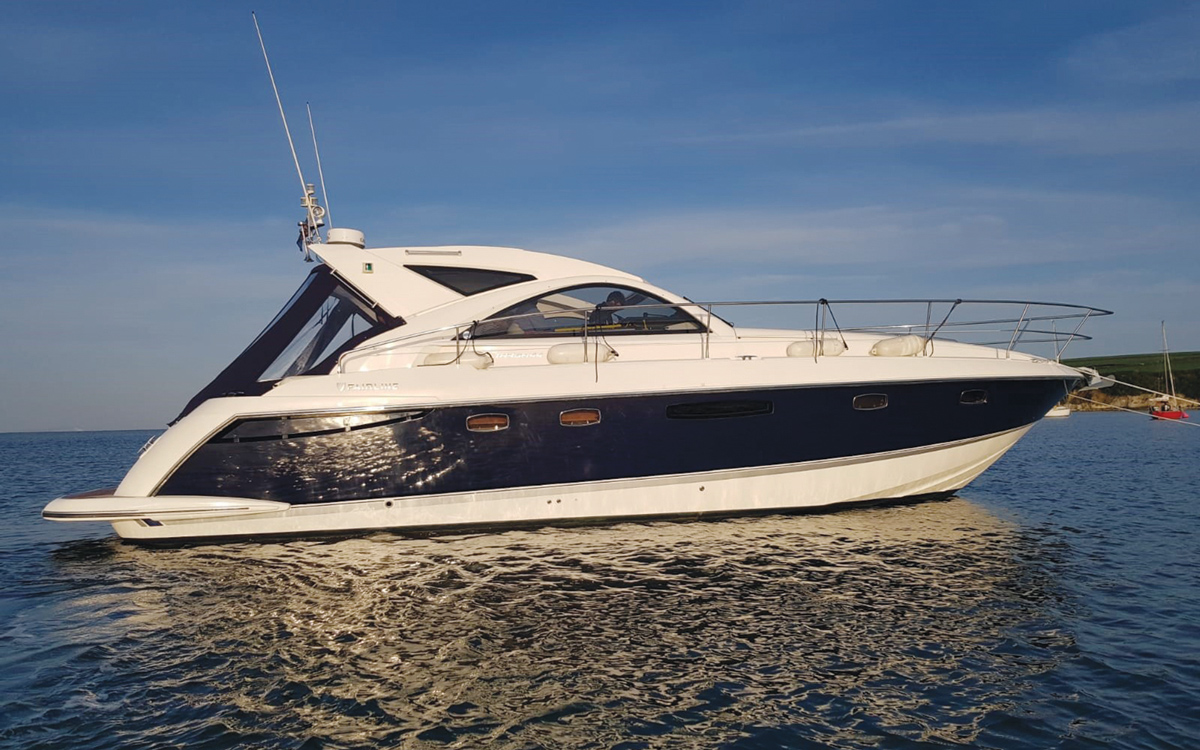 Fairline’s Targa 44 is a boat of choices. When new, alongside the usual selection of interior upholstery colours and woodwork options, buyers could opt for sterndrive or IPS power and choose an open boat or an open-backed hardtop with a sliding roof. This boat was clearly a no-expense-spared specification, coming as it does with the costlier IPS drives and the hardtop over the cockpit.

Fairline does boat interiors so well, and Fairlines of this era in particular. Finished in satin oak, it’s modern and classy. Spacious too, with a decent cabin at either end (the aft featuring scissor berths that swap easily between singles and a double), two heads and a dinette opposite a generous galley. 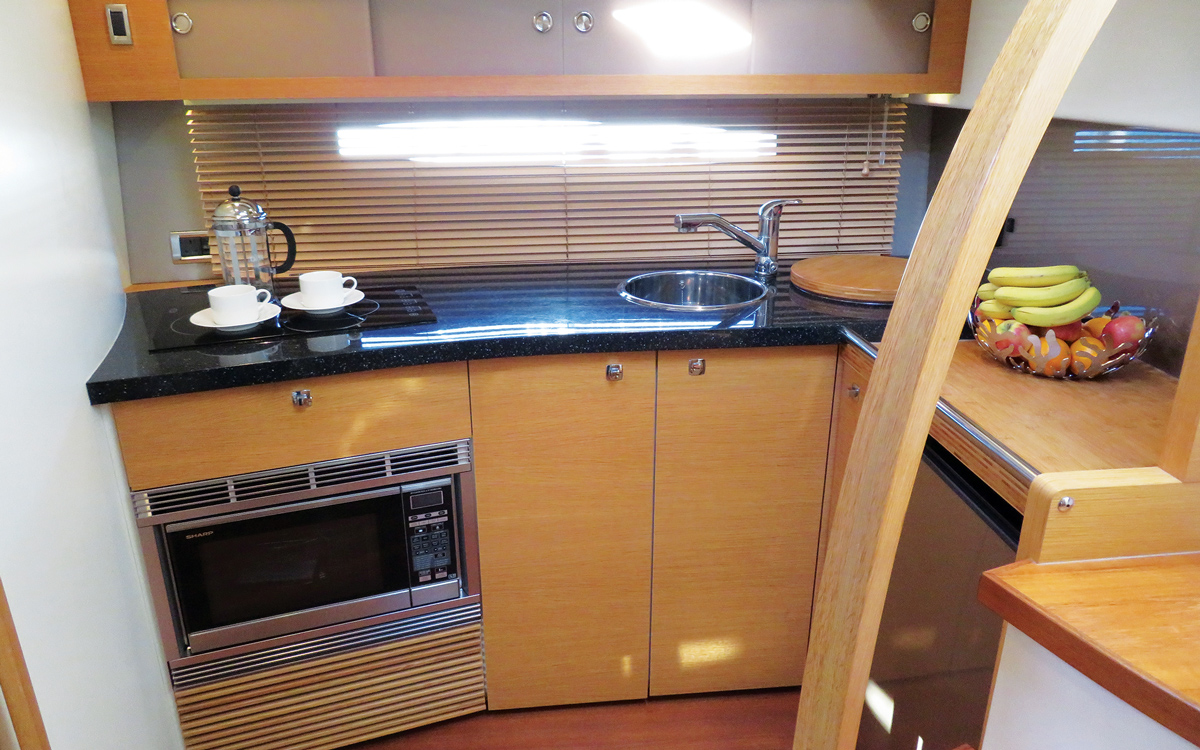 While the open boat experience was an option, many owners opted for the hardtop version, which adds the GT to the nomenclature. It retains the same cockpit layout, with its wraparound seat alongside the double helm for a sociable area for crew and a simply enormous run of seating on the lower aft cockpit section complete with a useful wet bar.

The hardtop itself features a solid sliding roof section which traded its inevitably smaller aperture for the resilience and weatherproofing of fibreglass over the fabric alternative.

Fairline offered a huge range of engines in this model, all Volvo Penta twin installations. You could also choose from sterndrive or IPS pod drive. Smallest were a pair of D4-300 engines that still gave a decent 30-knot top end. D6-370s on sterndrives up the ante to about 34 knots. This boat, with the largest IPS600 D6-435 435hp engines clocked about the same when we tried one, although it was slightly down on revs, suggesting there might have been a knot or two more to be had. 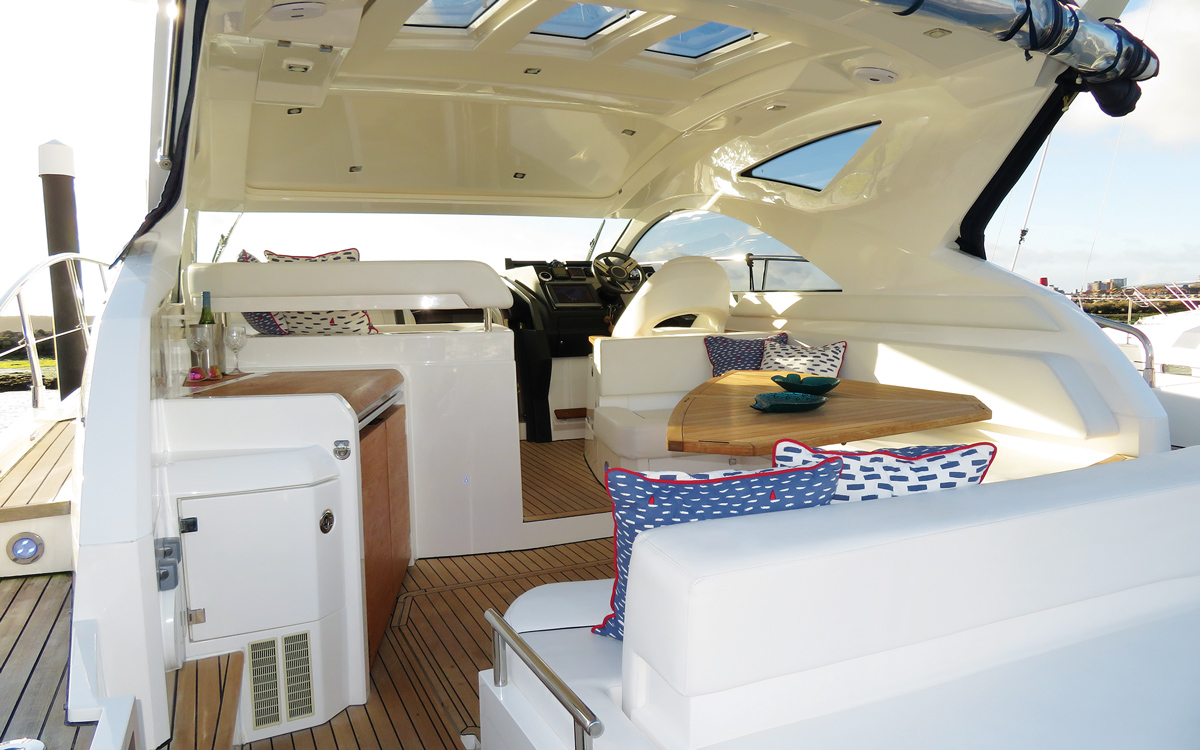 When tested we described the Targa 44 with IPS drives as having ‘the perfect response to the wheel. It’s sporty enough to have fun with, but solid enough for a long cruise with the autopilot engaged.’

First published in the October 2021 issue of MBY.