Our used boat expert Nick Burnham picks out four of the best liveaboard boats on the secondhand market right now.

One of the real joys of boating is the sheer diversity of it. Whatever you want to experience, whether it’s exhilaration, exploration, relaxation, escapism, social interaction or solitude, there’s a boating style and a boat type, specifically made for you.

And exactly the same is true for the ultimate boater’s fantasy – living aboard your floating home full time (it’s what we all dream of, right?).

So here to fulfil the fantasy are four great examples of vessels that could either take you and your family or friends around the world in a constant stream of adventures, or a more modest barge that would allow you to park up on a quiet stretch of the River Thames and enjoy a constant stream of G&Ts! Cheers! 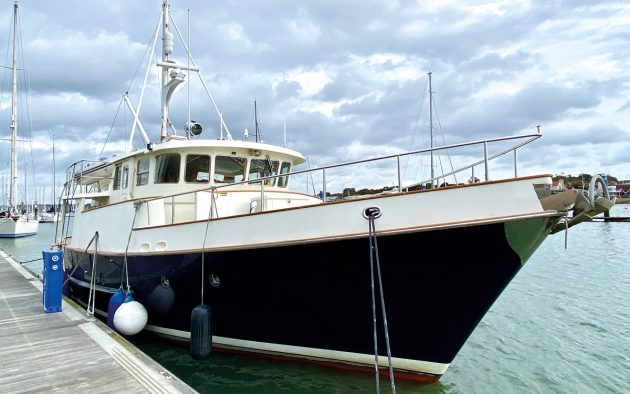 The Nordhavn 46 is Genesis for Nordhavn and set the tone for pretty much every model that followed. Pacific Asian Enterprises was formed by Jim Leishman and Dan Streech in 1974, originally importing and selling a line of boats from Taiwan called Transpac.

In 1978 Jeff Leishman, Jim’s younger brother, joined PAE as a part-time employee whilst still at school. Jeff completed his studies in 1987, and received his naval architecture diploma from the Yacht Design Institute.

As part of his graduation requirement, he was asked to design a vessel of his choosing. That actual design became the Nordhavn 46 and an entire new genre was born. 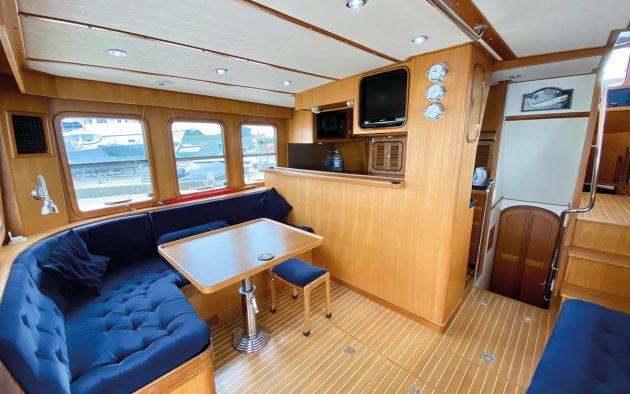 Several layout options were tried in the early days, before settling down to the layout you see on this 1997 example, much of which echoes through to current models.

Designed for long-term living aboard, there’s a large saloon and galley on the main deck, with steps down to an owner’s cabin in the centre of the boat (reducing motion at sea to a minimum).

But another set of steps lead up to a proper separate wheelhouse, little-ship style. Steps forward from here drop you down to a separate guest cabin in the bow.

A wide side deck leads from the cockpit along the starboard side and up around the front of the wheelhouse in the form of a Portuguese bridge protected by a bulwark from the foredeck.

Follow it round and you’ll go back past the wheelhouse on the port side and up the stairs again to the boat deck above the saloon where the tender is stored. 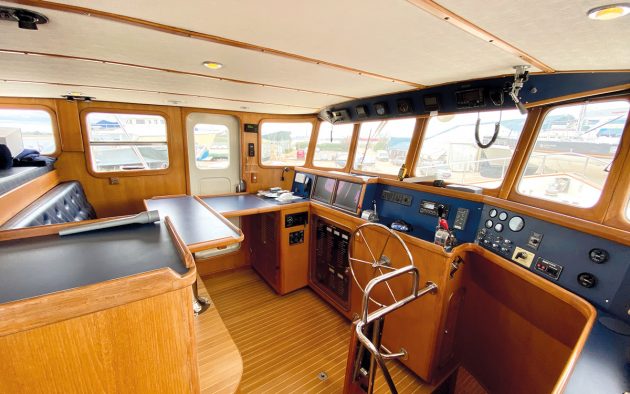 Nordhavns are all about range, which is why speeds are strictly limited to hull displacement speed rather than forcing more knots via a semi-displacement or planing hull.

There is a lot of boat under the water, with its full hull shape and long keel designed to help the boat plug on and on. 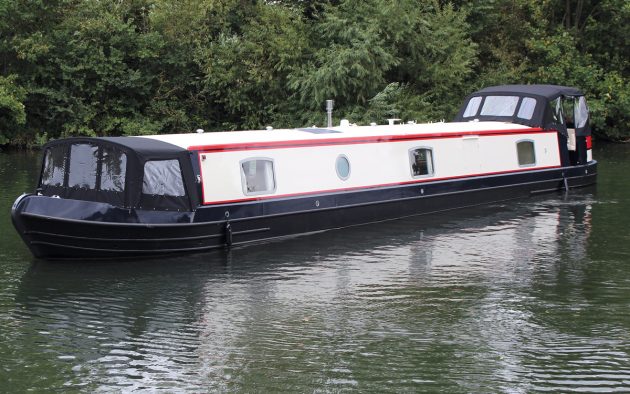 Widebeam narrowboat sounds like the ultimate oxymoron, but it’s a term used to denote canal barges that are, well, wider of beam. A typical narrowboat is 6ft 10in wide, and it’s constructed to this dimension in order to access virtually all of the British canal system.

In short, there are places a wide beam just can’t go. But there are plenty of places that it can. There are four main UK ‘cruising grounds’ for the widebeam owner: London and the South; East Anglia; the Severn waterways; and the Trent and North. Indeed, many owners simply use them as floating homes and never go anywhere at all. 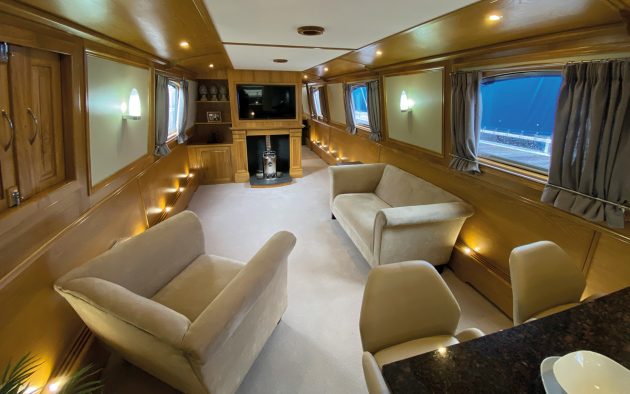 The saloon looks more like an apartment than a boat, with proper domestic furniture…

So what’s the point of a wide beam narrowboat that can’t go everywhere? In a word, space. At 10ft wide, it’s not far short of double the beam, meaning you get almost twice the internal volume for a given length.

But it also gives you rooms that feel far more like those in a house and less like railway carriages. Given that very little of the interior is structural, it’s easy for the manufacturer to customise the layout. This particular boat has a large bedroom at the bow, a generous bathroom and a huge lounge/diner large enough for domestic furniture plus a kitchen.

Narrowboats tend to major on internal space so there is little more than vestigial side decks. There is a decent cockpit at the aft end with a large crescent of seating around a table, and a helm station with wheel steering rather than the tiller of more traditional designs. There is also a ‘well deck’ forward, which is basically a small cockpit in the bow accessed from the forward cabin. 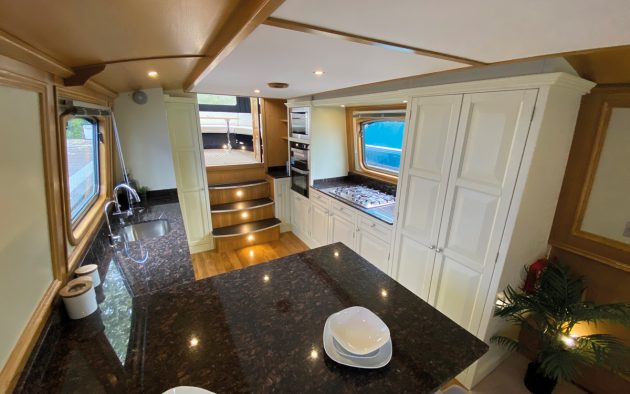 Performance is probably not a word you associate with 62ft of 10mm steel plating powered by a Barrus Yanmar Shire 50hp, 4 cylinder 2,190cc diesel engine.

It will move you sedately around the inland waterways, but the fact the water tank is almost double the size of the fuel tank encapsulates the priorities of these vessels.

A misnomer – if you’re planning to put to sea, this is not the boat for you. 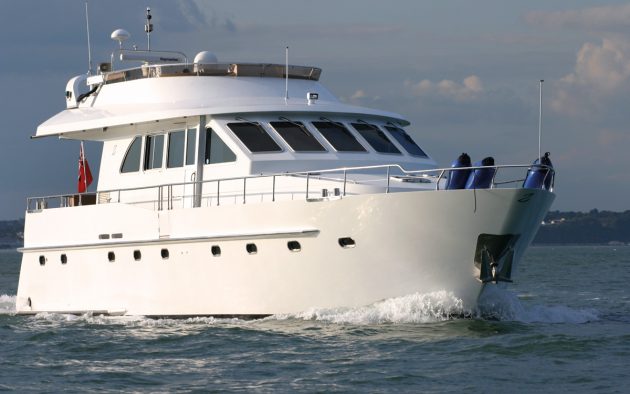 Built in 2002 by Zijlmans Jachtbouw, a family owned yacht builder in Drimmelen on the Amer River, North Brabant in Holland, this Triqual 65 has had a rather colourful history. It ended up in the Caribbean before being shipped back to Amsterdam in June 2011.

Following a tip-off from the French authorities, the HMRC intercepted the boat in Southampton. After seven days of very thorough searching, they found no drugs inside the boat. There was, however, the small matter of 1.2 tonnes of cocaine worth £300,000,000 hidden in a secret compartment located underneath the bathing platform!

The result was rather a lot of work needed when the current owner bought the boat from an HM Revenue & Customs auction in 2013. A total interior strip and rebuild to a high standard followed.

The owner wanted a boat for exploring the coastlines of Ireland and Scotland before heading over to Scandinavia and the Baltic Sea, so comfortable liveaboard boat was the name of the game and a full interior refit followed, creating a very contemporary and, above all, spacious displacement cruiser with three cabins (two doubles and a twin), a lower dinette and a large saloon area. 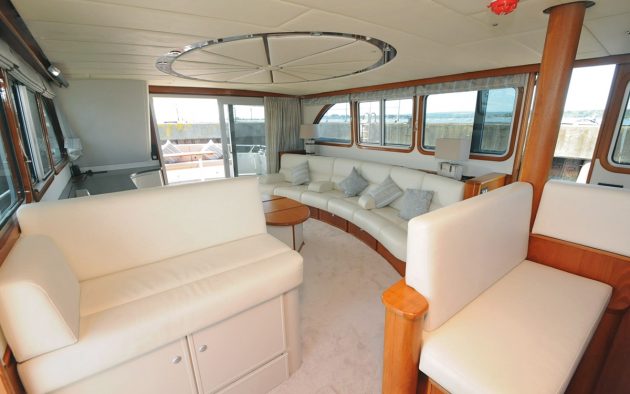 A flybridge motor yacht, there is masses of space on the outside too. The large flybridge has been refitted with more seating, there’s an aft deck to enjoy and deeply bulwarked side decks encircle the boat.

A pair of Vetus Deutz DT67 231hp six cylinder diesel engines pushing over 40 tonnes of steel about (the hull is 6mm thick below the waterline, 5mm above) is never going to set any speed records, but a displacement maximum speed of 10 knots and an 8.5 knot cruise is not too shabby at all, nor is the fuel burn of 28 litres an hour, giving an impressive 1,000 nautical miles of range. 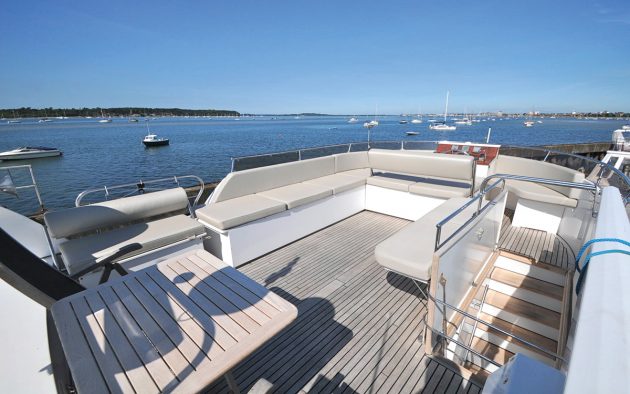 That weight of the Triqual 65 is also going to do a pretty good job of flattening any chop offshore. Registered as an RCD Category B ‘Offshore’, it’s a boat designed for far more ambitious routes than just coastal cruising. 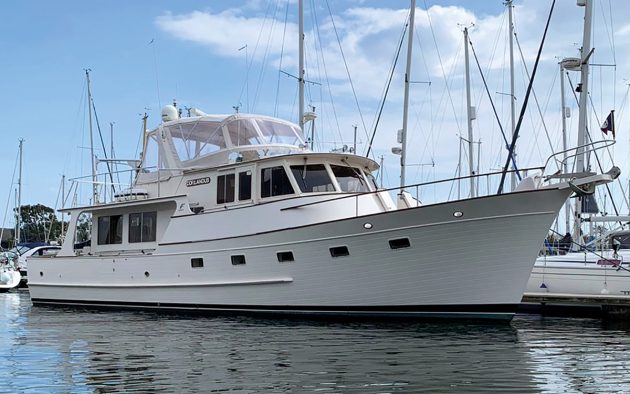 Tony Fleming was the technical director of American Marine in Hong Kong, builder of the Grand Banks line of trawler yachts, before leaving to set up his own company under the Fleming brand name. He and business partner Anton Emmerton worked with an American naval architect, Larry Drake of San Diego, California, to develop an all-new range of pilothouse boats.

The Tung Hwa facility, located near Kaohsiung in Taiwan, was selected to build them. The very first model was a 50-footer, with this 53ft version following from hull number 9 onward.  Intriguingly, the boat was originally designed as a 55-footer but a dam was inserted in the aft end of the mould to shorten the hull to 50ft.

Soon after the dam was pushed back to create the Fleming 53, then in 1990 it was finally removed altogether and the Fleming 55 proper was launched as it had been envisaged all along.

Available in two or three-cabin layouts, this boat is the two-cabin version which creates a much larger owner’s stateroom with vanity desk, large guest port cabin and storage room all on the lower deck forward.

A raised wheelhouse gives great visibility but also direct access to the flybridge for easier movement between decks. Further aft, a large saloon with the galley forward on the same level makes this a great social area. It’s ideal for extended cruising as a couple with a pair of guests, which is exactly what this boat was designed for. 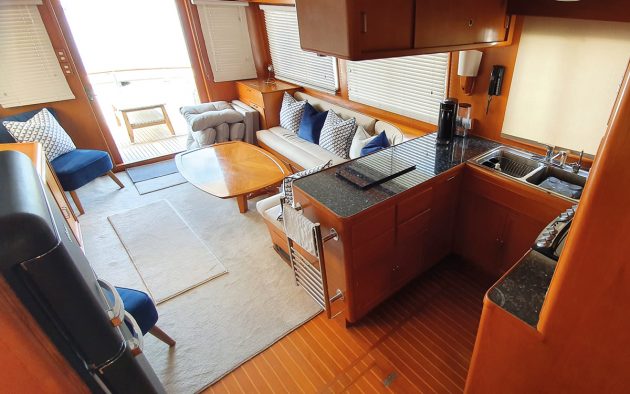 One of the most noticeable things about the decks of the Fleming 53 is just how low the side decks are. Open a door in the high bulwarks and you can step straight aboard – try that with a contemporary Sunseeker or Princess!

Back aft, the cockpit is kept completely clear for freestanding furniture and there’s another stairway up to the flybridge where you’ll find fixed seating, the tender, complete with crane for launching, and the liferaft.

The original owner of this boat specified twin Caterpillar 3208 NA diesel engines that produce 210hp each, giving a cruising speed of 9 knots and maximum speed of approximately 12 knots. 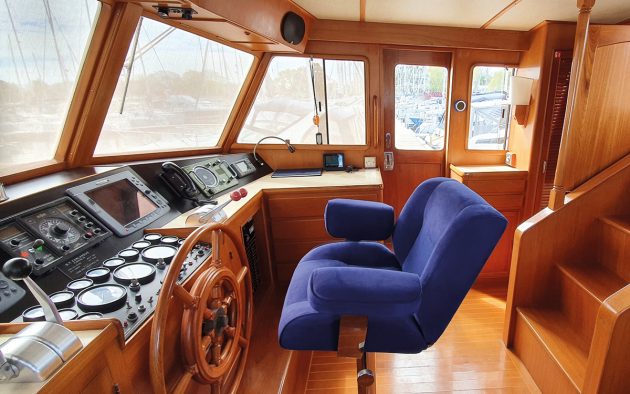 Those low side decks help keep the centre of gravity low, aiding its legendary seakeeping and minimising rock and roll (of the non-musical variety).

First published in the September 2021 issue of MBY.