Sam Fortescue speaks to the owner of the unique and stunning Hanstaiger X1, almost certainly the world’s most radical cruising trimaran inside and out. Only three of these unique designs will ever be built

Imagine a boat that combines the aggressive loom of a Lamborghini with the controls of a fighter jet. Pop a rig on top, open the transom like the cargo door of a Chinook – oh, and bung a grand piano in one corner of the saloon. This, with a bit more glass, ferocious styling and creature comforts galore, is the new Hanstaiger X1 – a trimaran so beautiful and strange that it has to be the brainchild of an eccentric. The Hanstaiger X1 truly is like nothing else afloat.

The individual behind it is John Ordovas, who created a small shipyard in southern Spain. His vision was for a cruising yacht that tore up convention and offered a vast single-level living space, architectural finish, a gigantic beach club and easy performance.

The result is a trimaran where some 85% of the interior space is on the same level, resembling a generous urban loft apartment. The cabins and heads in the side hulls, plus the master cabin occupying the forward half of the central hull, all connect without steps to the main saloon. 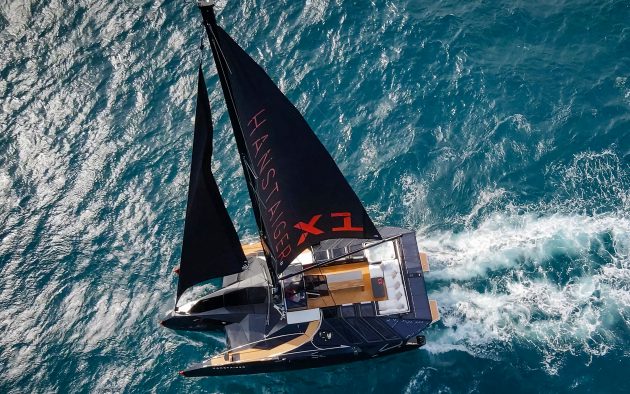 This was one of the reasons Ordovas chose to build a trimaran, rather than a catamaran. “The problem with catamarans is you go into the side hulls and it ends up being something of a rabbit hole with tight corners,” he explains.

It is a brave design, because all that interior space comes from extending the superstructure to the very stern of the boat. “There were some risky elements to this,” he admits. “We were removing the deck space and the cockpit. But in a way, the opening at the back becomes the exterior of the boat as the hydraulic doors become a beach club. It’s one of the design features I’m most proud of.”

Instead, the helm has been moved to the top of a broad staircase (I hesitate to use a term as traditional as ‘companionway’), where an entirely glass-lined bridge amidships gives all-round visibility. 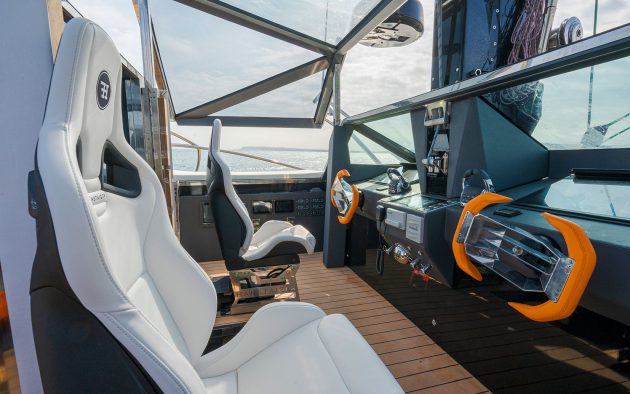 Cockpit is absolutely the right term here, with its huge high-backed sports seats and natty little automotive steering wheels. “My father and grandfather were fighter pilots, and I’m also a pilot,” explains Ordovas. “I was always trying to inspire the architects to think of a fighter pilot cockpit – that’s why there’s a glass canopy that comes up from the helm station.”

The canopy can be opened up via wings at the side if you want extra ventilation, or that whoop-as-you-go feeling. It also lets you clamber out onto the coachroof, where a teak-lined footway bordered with an elegant stainless-steel balustrade guides you safely down to the bows.

It’s an important safety feature, but Ordovas strove to make it a largely unnecessary trip. “The boat’s been designed so there’s not much reason to go to the bow. We have captive winches for the sails, and there’s a push-button system for sheeting in, raising sail etc, so everything is electronics-based. That’s also why the deck of the boat is quite clean – we don’t have many ropes flying about.” 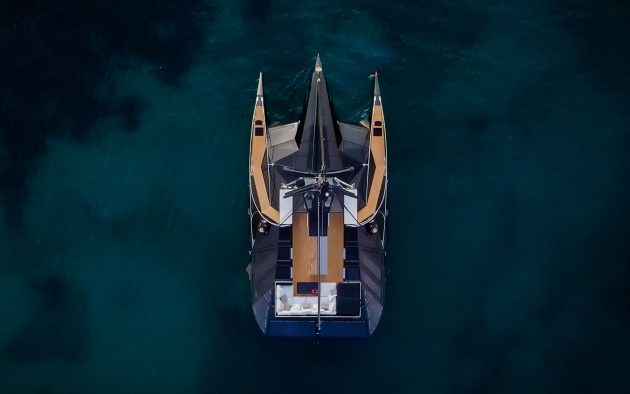 The XI’s scorpion-like form when seen from overhead. Photo: hanstaiger.com

While this is avowedly not a boat for a purist sailor who likes the feedback from helm and sheets – Ordovas himself says as much – performance was still a key part of the brief.

In the first sea trials off Alicante, where the yard is based, heavy conditions saw the boat make an easy 15 knots under main and jib alone. “The sails for me were more from a practical perspective – something environmentally friendly that can get you from A to B in comfort and safety. Sailing in this boat is great fun, it’s pleasurable that you can adjust the sails at the touch of a button.”

The X1 has a lifting centreboard to keep her pointing well, and the lay-up is in a mixture of foam-cored carbon and glass for the hull, with full carbon for the superstructure. It keeps weight to a minimum, but the design is not light at 40 tonnes of displacement. 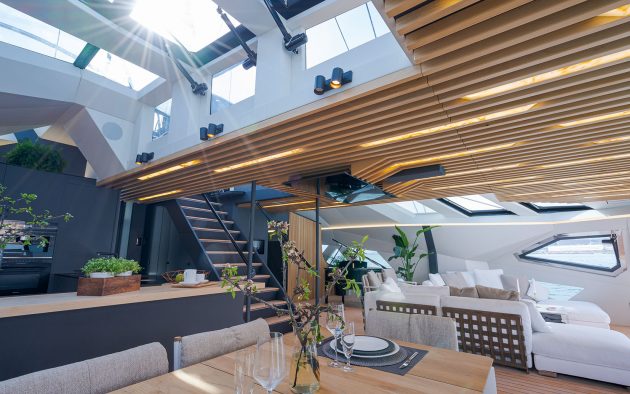 Huge saloon has a wide companionway staircase leading up to a glass-sided cockpit. Photo: hanstaiger.com

There is no current allowance for a large downwind sail for tradewind sailing, but there’s nothing in the design of the boat that prevents that from happening, says Ordovas.

He is also tinkering with something he calls a ‘dynamic stabilisation system’: a pair of ailerons fixed between the outer and the central hulls and linked to a gyroscope. Operating like the flaps on a plane’s wing, the system is being designed from scratch to eliminate the already modest roll that the trimaran experiences. “My wife does get a bit seasick,” says Ordovas, almost apologetically. “I’m keen to push the boat as much as I can in terms of extreme design.” 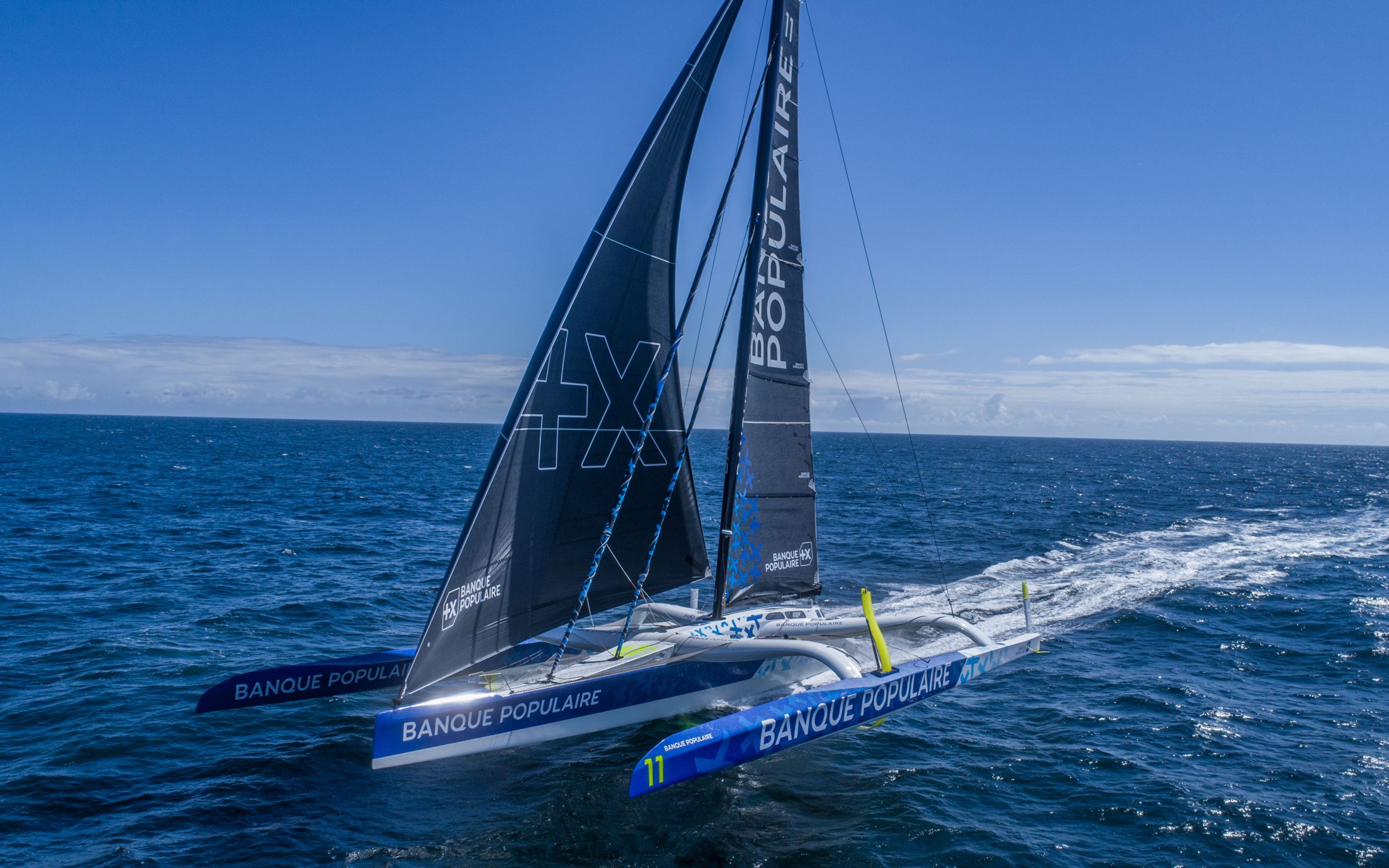 Banque Populaire is one of the world’s most experienced and successful sailing teams, and was the force behind Armel Le… 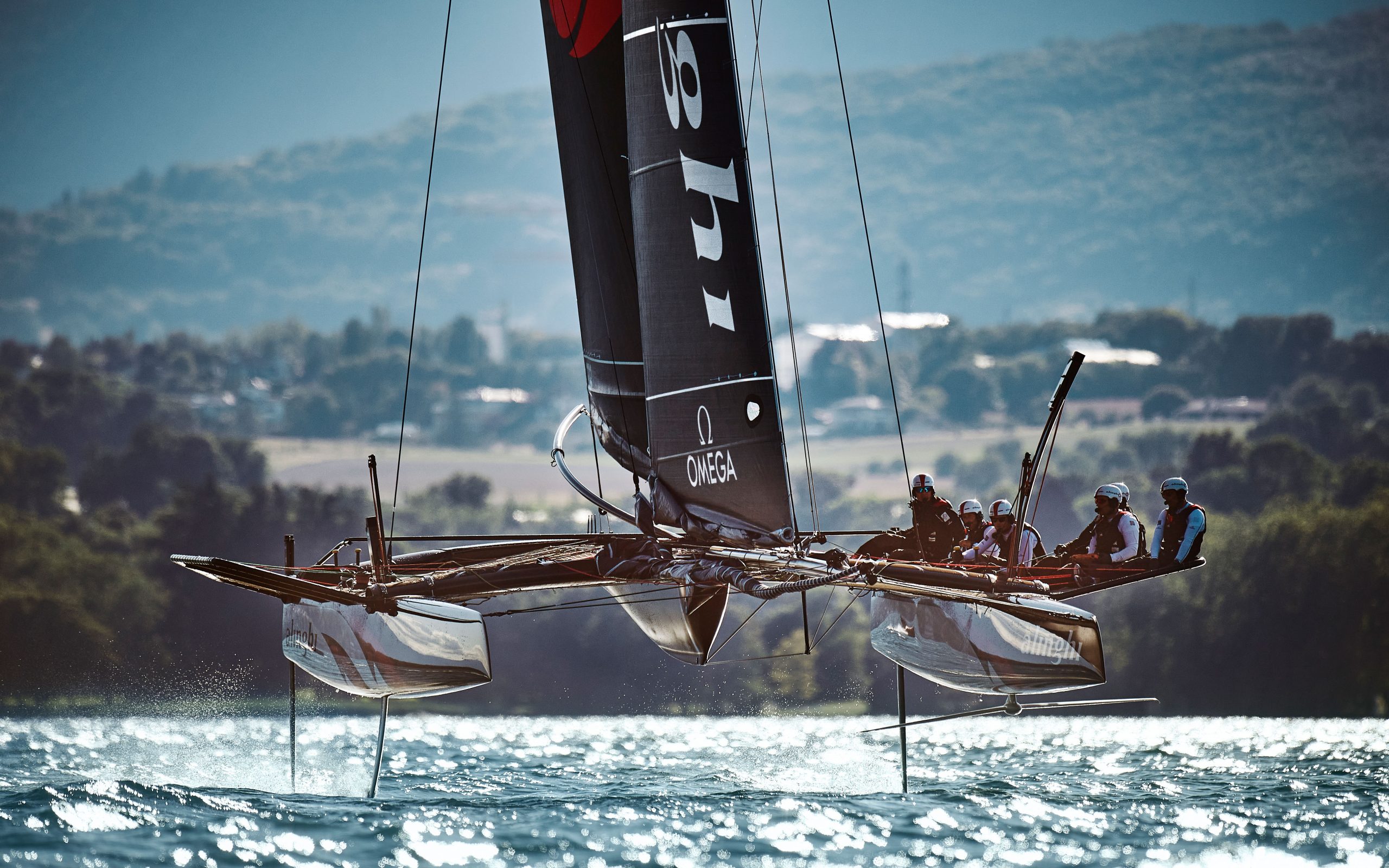 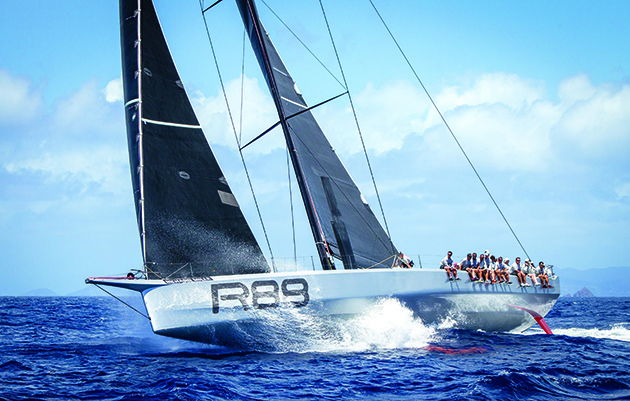 “Will I bring Rambler 88 back next year? It’s too soon to be sure, but it’s certainly a possibilty.” The…

In a way, to focus on the sailing characteristics of the X1 is like reviewing the sound system in a Lamborghini. It’s the accommodation on this boat that takes your breath away, as well as the audacious reimagining of living spaces, which is a thousand miles away from the standard saloon-cockpit combo.

With its 70m2 floor space, the saloon is huge, with 3m of headroom to match. The ‘galley’ more closely resembles an open-plan designer kitchen, with an eight-person dining table and sophisticated freestanding Italian furniture. A huge, swivelling LCD screen folds down from the ceiling. 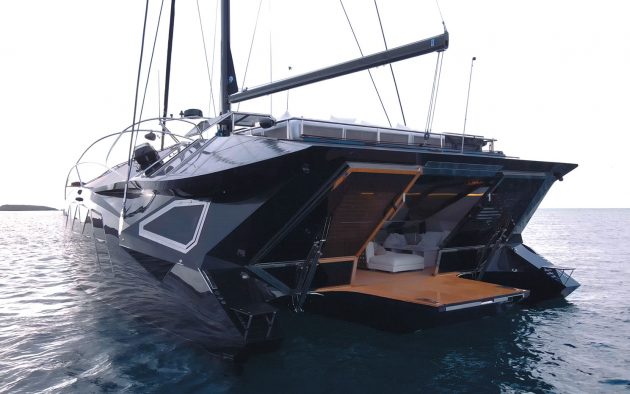 But the star feature is the way the whole transom lowers down in three large panels to create a 27m2 ‘beach club’ lounging area. Teak decked, there are clever sunloungers built into the huge hinged aft doors.

This, together with the gull-wing style opening windows in the topsides, means that the whole saloon is effectively transformed into outdoor space at the touch of a hydraulic control.

“This way, we avoid the replication of spaces that you see on other boats: two sofas, two dining tables and so on,” says Ordovas.

Structurally, the design relies on a massive 120kg carbon fibre beam that runs from quarter to quarter and transfers the loads from the deck above and the flexing outer hulls into the main hull. 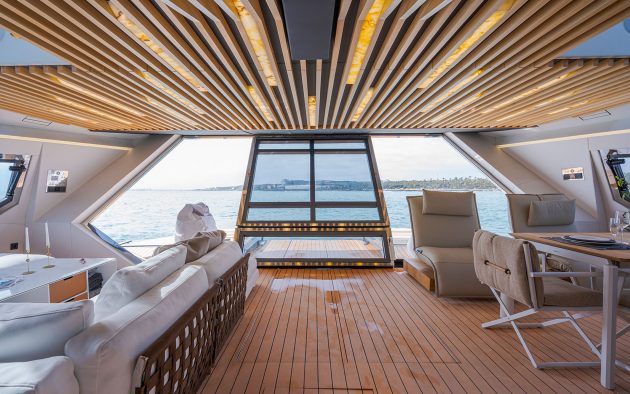 Hydraulically-controlled aft doors allow the saloon to open out onto the transom. Photo: hanstaiger.com

Further strength and stiffness is provided throughout the superstructure by a lattice of carbon fibre members.

And though you might lose that traditional cockpit connection to the sea around you, much of it is returned via the flybridge lounging area. There is seating galore up here, a barbecue, fridge and even a glass-walled jacuzzi (yes, really) that you fill from the boat’s 1,200lt freshwater tank, with help from the high-output 260lt/hr watermaker. Hot water comes from an on-demand diesel heater system.

The master cabin is on three half levels, with a double bed at saloon level, then steps down to sofas in the point of the bow. The heads are down a few more steps, tucked under the bed. Also at this level, further aft, is a laundry and nanny’s room. A further two cabins offer a guest double and a twin with reclining beds. “Like a first-class cabin on a plane,” says Ordovas.

All this luxury requires power, of course – a lot of it. There are a token 2-3kW of solar panels built into the hull, and the option for a pair of wind turbines, although hull number one won’t have these. 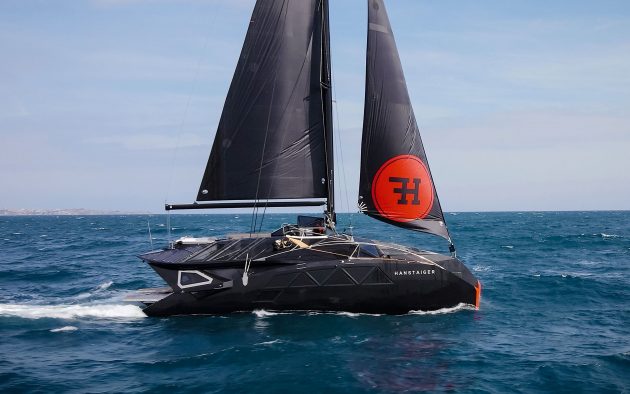 The X1 has taken 2,000 hours of design work (and counting). Photo: hanstaiger.com

There’s a 50kW lithium-ion battery bank for silent overnighting, and it all requires two 8.6kW gensets alongside the twin 165kW Volvo Pentas to keep it going. I ask Ordovas about using regenerating props, but it’s not something he’s thought about. Electric propulsion is another story, however.

“We considered it very carefully. I was initially keen, but the truth is that, at least at the moment, I don’t think the technology is there.”

As is often the case with original yacht designs, the X1 project was borne out of frustration with what the multihull market already offered. “This was five years ago, and the truth was, I didn’t find anything particularly exciting in the mid-sized yachts,” says Ordovas. 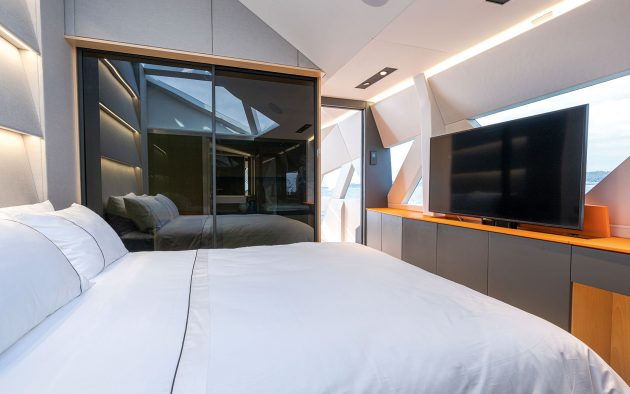 The design allows for a sauna and hydromassage cabin, but Ordovas has diverted this space into wardrobes for stowage. Photo: hanstaiger.com

So instead of hunting round for the best compromise, Ordovas, who has set up international schools all over the world, decided to run a design competition to provoke some new thinking. “The underlying point for me was, if we’re going to do this, let’s do something different, exciting and fun. I didn’t want to do something that looked like all the other yachts, otherwise I might as well just buy one!”

There was a surprising response to his advertisement on freelancer.com, and he was able to browse for the most interesting designs. Work from Spanish naval architects Antonio Claro and Nerea Perez caught his eye. “I spent two years working with them as a kind of hobby, initially, to see if we could develop a design and then if I was brave enough to go ahead and build it.”

By then it was 2017, and Ordovas commissioned Spanish yard Flash Catamaran to build it. In what lesser souls might have seen as a warning from the gods, Flash went bust a few months into the project. After long consideration he decided there was little point in taking the risk with a third party. “So, we set up our own shipyard and started hiring people,” he says. 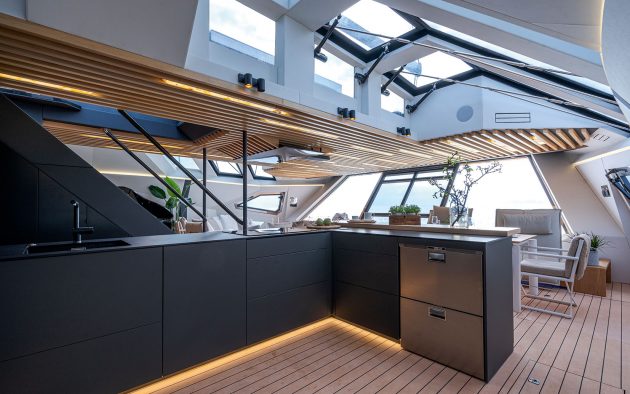 The open plan galley, floating ceiling decor and double height saloon have all the feeling of a loft-style luxury apartment. Photo: hanstaiger.com

“Then the idea of building a brand came up. I’m convinced that the design we have is very special in terms of the looks of the boat.”

Now the first boat – his boat – is in sea trials, Ordovas is already turning his thoughts to the future. He has sworn to destroy the moulds after just two more X1s have been built. “For me, the value of [this] boat cries out for it to be exclusive,” Ordovas explains. “If you saw too many of these, it would devalue the product.”

He is already mulling an X2 and an X3, and says there has been phenomenal interest in the boat. So much so, that he has appointed superyacht sales agents Northrop & Johnson to lift the weight of dealing with potential customers off his shoulders. “We’ve already had a request for a larger boat,” says Ordovas. “The reality is we’re still a small, boutique shipyard and our production is limited.”

That may be so, but he is undoubtedly ambitious. With only three X1s due to be built you may never clap eyes on one – but if you do you won’t mistake it for anything else afloat.

If you enjoyed this….

Yachting World is the world’s leading magazine for bluewater cruisers and offshore sailors. Every month we have inspirational adventures and practical features to help you realise your sailing dreams.
Build your knowledge with a subscription delivered to your door. See our latest offers and save at least 30% off the cover price.

The post Is this the boat Batman would sail? appeared first on Yachting World.