Phil Draper reports on Kairos a 90m concept which debuted at the Monaco Yacht Show, designed to operate much of the time with zero environmental impact

Oceanco’s latest concept Kairos takes ‘sustainable yachting’ to a whole new level. This 90m what-could-be vision debuted at the Monaco Yacht Show in September. The design reimagines how space aboard can be utilised and how sustainable yachting can be and how it can develop into the future for right-minded owners.

Kairos is the result of a creative huddle between the Dutch gigayacht builder’s ‘NXT’ think tank, the naval architects at Lateral in the UK, and that Italian design and engineering giant Pininfarina, which has not only been responsible for some of the world’s most iconic car creations of the past nine decades, but has also been regularly making waves in the marine industry, not least recently working with Princess on its foiling R35 and more radically styled X Series motor yachts. 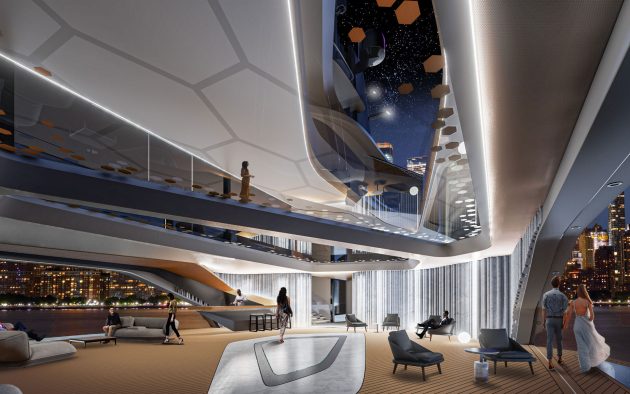 In terms of onboard spaces, Kairos proposes an alternative interaction between guests and crew, especially less segregation. All the usual features will be there, of course – everything from palatial cabins, lounges and dining areas inside and out, not to mention balconies and beach clubs, helicopter capabilities and garages packed with tenders and toys – but at the heart of the yacht think Italian ‘piazza’, an open meeting space with views to the sky.

58m superyacht will be powered by green energy

Everywhere else the use of glass opens up share spaces in fabulous new ways. Think walking down a sidewalk in New York and looking up at the skyscrapers and sky, says Kevin Rice, Pinifarina’s chief creative officer. Walk through this boat, he says, and you will look up and see the decks above and the mast towering above. Then look to one side and you see the sea and to the other family space or a restaurant. This is the special thinking behind the very special Kairos experience.

An important starting point in the creative process was to not think about boats, says Rice, because boats are about moving from somewhere to somewhere. A key goal with this project was to pause the conventional passage of time, to create a timeless environment, where various aspects of life can co-exist – work, family and play – and regardless of where the yacht happens to be in the world.

Is this just another whacky concept? Oceanco is emphatic it represents an authentic step forward, meaning what is proposed could actually be built today with present technologies.

Instead of suggesting an infeasible net zero environmental impact all of the time, which is not possible presently, the Kairos ‘E-Hybrid’ solution could realistically operate for 70% of the day with zero impact, says James Roy, managing director at Lateral.

Perhaps more important still is this design’s ability to adapt as technology and expectations evolve, especially as regards developments in battery technology. Such things will become increasingly important now as cruising grounds begin to restrict access for polluting vessels. Roy says, while they aspire to “total zero” which isn’t yet possible, they can already deliver “local zero”.

Although capable of becoming a reality, Kairos has not been developed with any one client in mind. Rather it is intended to appeal to more people and probably more younger people than Oceanco’s traditional gigayacht clientele, and especially those with a genuine interest in sustainability and perhaps that coming to yachting without the usual preconceptions. It is about fostering the right sort of conversations.

Kairos incidentally is a Greek word and effectively translates as ‘timely’.